With the release of episode one of The Walking Dead, it was fairly clear that developer Telltale Games had something fairly special on their hands, well, special by the measure of ‘interactive adventures’ at any rate.

It also didn’t hurt that unlike previous IP’s which Telltale have made to walk down the interactive adventure path, such as Back To The Future and Jurassic Park, that The Walking Dead is enjoying a very contemporary groundswell of fan support in the form of hugely popular TV series and on-going graphic novella.

But really, that’s more reflective of the fact that zombies are making some real waves in popular culture than anything else. From the cinematic re-imaginings of the various Romero classics, to the likes of the Resident Evil games and the inclusion of zombie modes in the world’s favourite FPS(tm); public awareness of the shambling, undead beasties has never been higher. 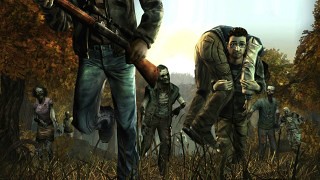 Things start off bad in ‘Starved for help’, then they get a lot worse.

Just like it’s predecessor, ‘Starved for Help’ certainly doesn’t have any shortage of flesh-chewers, but like any good piece of zombie-powered fiction, the real crux of the narrative often comes from the conflict and in-fighting within the human element and its here that Episode 2 really shines.  Without giving too much away, episode two deftly shifts the focus away from the titular menace to the living; neatly echoing the promotional tag-line for the third season of the popular AMC TV show of the same name with “Fight the dead, fear the living”. Indeed, paranoia of fellow human contact runs rampant throughout the group in this episode and when a potential avenue for salvation appears, desperation made manifest through hunger makes things go south pretty quickly and it’s here that a great deal of really bad stuff starts to happen.

As ever, the single strongest aspect of Telltale’s adaptation of the Robert Kirkman penned fiction, remains its quality of writing. With just two episodes released in their very first season, The Walking Dead episodic game is already telling a more emotionally impactful tale than anything its developer has done so far. Not only is it superior to its Telltale Games stable-mates, the standard of writing here is notable also for being substantially more tonally dark than the TV show that so many people will likely know it for. This, as you should reasonably infer, is a good thing considering the dark and largely bleak nature of the fiction that both adaptations share as their genesis.

The other thing that The Walking Dead does extremely well, which by proxy is crucially supported by the quality of writing, is the level of choice that you’re given and how the consequences which play out in accordance to the choices that you make. Being the second episode in on-going series, I was very curious to see just how directly and to what degree the choices that I made in the first episode would affect the characters and events here. I can happily report then, that just about everything you’ve done previously comes back to either kiss you on the cheek or bite you on the ass in episode two.

One such example was a member of the group called Kenny, whose son I had suspicions about because I thought he had been bitten by a Walker (zombie) in the first episode and naturally being the insensitive dick that I am, I let Kenny know that I thought his son was a walking time-bomb which as you can imagine, didn’t go over terribly well. So, fast-forward to episode two and whilst our dear old Kenny is largely civil towards me, he continually let’s me know that the doubt I placed on his family is being reciprocated in kind and that he doesn’t have my back anymore.

It really is hugely satisfying to have your choices from the first episode affect events and conversations in such an obvious and prominent fashion. As well as reinforcing the notion of the fact that you’re part of an on-going, dynamic TV show in which you make the decisions, it also helps to lend a lot of dramatic weight and purpose to those decisions that you make.

Gameplay wise, the game follows the exact same template lain by the original that I expect it to follow throughout the rest of the season – you play as the main character Lee Everett, you talk to people, solve simple puzzles and occasionally stave in the skulls of some undead folk. ‘Starved for help’, like its predecessor provides no surprises; it remains a roaming point and click affair, punctuated by action sequences which are handled in Quick Time Event fashion.

See a zombie trying to make chow out of your legs? Press ‘A’ to kick him off. Want to shoot someone in the face with a gun? Manoeuvre the crosshair over their face and press ‘B’. It’s all terribly simple stuff and literally nothing is different here from a gameplay perspective and the puzzles, like in the first episode, never ever approach anything to challenge the old grey matter.

Really though, this sort of extremely linear hand holding and the complete lack of extra-curricular objectives to accomplish should come as a surprise to approximately nobody who bought this after playing the first episode.

Despite how conservative Telltale have been with the gameplay side of things, aesthetically this second episode remains largely identical to the first, with the cel-shaded visuals continuing to serve the game well with the obvious parallels that it draws to the source material; even if the range of locales isn’t anywhere near as varied as the first episode ‘A new day’.

With that said, ‘Starved for help’, also puzzlingly introduces a number of glitches that weren’t previously present at the season’s inception. Limbs go through solid objects on a routine basis during cut-scenes, odd camera angles abound in which character models flicker in and out and most troublingly, there are long noticeable pauses when the perspective shifts from scene to scene. To top it all off, framerate issues also inexplicably appear much more pronounced on the Xbox 360 code when compared with episode one running on the same platform.

Whilst it doesn’t significantly tarnish the experience, such technical issues are nonetheless issues and do impact on the experience to a lesser, yet still notable degree. Thankfully however, the quality of the voice work continues to be strong, with the actors aptly a showing a decent spectrum of emotion and the requite gravitas required for their desperate roles.

So as ‘Starved for help’ winds itself to its appropriately grisly conclusion and you’re given that ever-cool ‘Next time on The Walking Dead’ tagline, teasing you with the potential ramifications of the decisions you’ve made in this episode, you realise exactly what you’re getting yourself in for – more of the same.

You might have grounds for concern or complaint had the price per episode been more than what it is, but at such a low price, it’s difficult to begrudge the dynamic continuation of a wholly involving narrative experience set within the world of The Walking Dead; even if the gameplay aspect of the affair continues to have about as much meat on it’s bones as one of the franchises iconic, hungering cadavers.

Developed and published by Telltale Games, The Walking Dead Episode 2 is available to buy now on iOS, XBLA, PSN and PC.

An Xbox 360 copy of this game was independently acquired by the reviewer.