As a long-time fan of the Kingdom Hearts series, I was pretty excited to get my hands on the seventh title in the franchise, Dream Drop Distance. When it was first announced that the game would again follow Sora (with the added bonus of Riku!) and actually continue the events of Kingdom Hearts 2 directly, I was ecstatic. Three games of side-stories and prequels, while enjoyable in their own rights, were more than enough for me. It’s the most relevant and worthwhile offering in some time, but that doesn’t mean it is without its faults.

When I heard my dutiful companions, Donald and Goofy, were being replaced by rainbow-colored dream creatures that resembled Pokémon on acid, I died a little bit inside. Not only that, but the game was coming out for the 3DS, meaning once again that the faithful followers of the franchise were forced to purchase a new handheld with which to play the game. Awesome (not awesome). 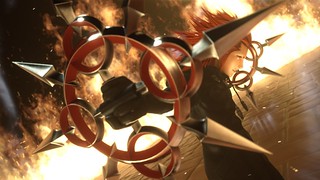 Over the last few titles, the story has become incredibly involved, convoluted, and often difficult to keep up with, but the opening movie did a lovely job of showing the most pivotal moments of the series to date in crisp, detailed animation; easily the best seen on the 3DS thus far. With that said, as soon as the opening ended, those pretty graphics are gone, surely until the end of the game.

Along with the nice opening to recap the story thus far, this game introduced an incredibly helpful tool called “Chronicles” that you unlock throughout the game. There are six Chronicles in total, each one giving a detailed retelling of a previous game in the series. For those of you who couldn’t afford to nab a PSP and missed out on Birth by Sleep, this is where you get caught up. Didn’t want to play the originally mobile-based-game-turned-DS-flop re:Coded? No worries. Chronicles covers that too. It’s a handy addition that makes Dream Drop Distance great for fans that have played every game as well as those who have only dipped their toes in the Kingdom Hearts universe.

Outside of reminiscing, a new feature added to the game that was supposed to be a big deal, as referenced in the title, is the Drop system. The first meaning to “Drop” is the swap from playing as Sora to playing as Riku, and I honestly don’t understand the big hullaballoo surrounding it. Early previews and interviews stated that you can drop suddenly and unexpectedly at any time and be forced to play the other character. A great idea, bound to be frustrating, but offering a new dynamic that would make you think carefully about what you were doing and hope that you didn’t get dropped while doing it.

Here’s the hitch — the drops are anything but sudden and unexpected. You’ve got a “Drop Meter” to show you how long until your next switch, and you find so many “Drop-Me-Not” items to refill the meter that basically gives you full control of your next Drop. As if that weren’t enough, you can drop from Sora to Riku or vice versa at any time by using the big “DROP” option from the menu, making the whole system kind of pointless and disappointing.

The second part of “dropping” refers to the new travel between worlds, replacing the Gummi Ship segments. Your character is flying/falling toward the next world and must complete an objective before the end of the interim, lest you be denied entry to that world. The challenges include defeating X amount of small enemies, defeating Y random boss, or collecting Z amounts of prizes along the way. It’s a fun and different mini-game type, but not as engaging as the Gummi Ship shooters. Plus there’s no awesome vessel to design and power-up.

Even more disappointing is the interaction (or lack thereof) with the characters in each world. Admittedly, some are better than others, and I did love exploring all the new worlds (NO AGRABAH OR OLYMPUS COLISEUM. AT LAST I AM FREE OF THOSE TOTALLY RUN-INTO-THE-GROUND BANES OF MY EXISTENCE), but I just didn’t feel connected to any of the worlds for any reason. The movie Tarzan is far from my favorite Disney flick, but I really got into the jungle in the first title, a large part due to the fact that Tarzan himself was swinging in the trees and vanquishing Heartless right by my side.

Thanks to having ridiculous fluffy Spirit allies, I never once was able to fight with the aide of Quasimodo or Quorra or Mickey the Musketeer. There are points in the game where Sora will have a meaningful chat with someone and they specifically say, “Alright! We are working toward the same goal or heading to the same destination! I shall accompany you for a while!” Then they disappear into the ether until you arrive at a cutscene where they inevitably leave. Well you weren’t really there in the first place, dude! Good riddance! 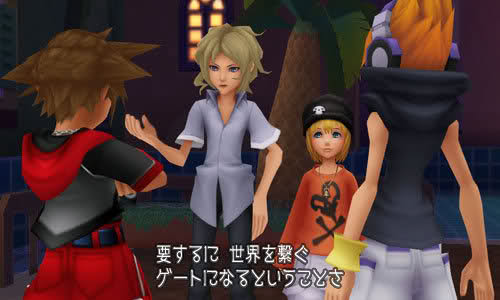 Tell me it wouldn’t have been awesome to have Sam Flynn or Quorra flinging their discs at enemies, or teaming up with Neku or Beat for a temporary player pact. Imagine the special moves you could pull off! Dozens of wasted opportunities.

The basic gameplay looks and feels akin to that of Birth by Sleep. The character models are smoother than the DS games and the Flowmotion controls make the motions… well… flow surprisingly nicely. Initially, it looked like Flowmotion would be incredibly confusing and immensely frustrating, randomly flinging characters all over the screen with little control. On the contrary, Flowmotion was easily manageable, constantly helping get to those hard-to-reach chests. The double-jumping and dashing around in mid-air pretty much negates the need for still apparent upgrades like ‘High Jump’ and ‘Glide’, the latter of which you don’t obtain until late in the game, feeling ridiculously slow in comparison.

Another new gameplay mechanic is something called “Reality Shift”. The Reality Shifts (RS) change from world to world, and always incorporate the touchscreen. For example, Traverse Town’s RS lets you pick up objects such as barrels or damaged enemies and fling them across the level into other enemies. The Grid’s RS lets you recode the enemies’ data to self-destruct or attack their allies. All in all the Reality Shift is an interesting idea and now and then can be really helpful in actual battles, but seems to dampen the typical fast pace of combat.

Speaking of battles, let’s move onto the games’ new entities: the Dream Eaters. When the first Kingdom Hearts came out, the Heartless were great opponents; dark, shadowy creatures, completely devoid of hearts, as their name would imply. Excellent for a game centered around the idea of friendship, where the heart is a central figure of even the merest example of love.

This time around, both enemies and allies alike, the Dream Eaters are the complete opposite; bright,
colorful, tacky-looking beings that can be both good (Spirits) and bad (Nightmares). Most of the Dream Eater designs are rather enjoyable, but the overly ridiculous colors seemed to not fit thematically. The good news is you can pick up different paint colors in the game to customize your Spirit allies to be a bit more tame-looking. The bad news is the painting really isn’t too effective. Let’s just put looks aside so as to not judge a monster by its paint job. At least they work well in battle, right?

Well, kind of. Here’s the deal. The Command Deck returns, allowing Sora and Riku to equip different attacks and magics that require cool down periods in between uses, and items which may be used in rapid succession. The difference here is that the two protagonists do not learn the abilities. That’s where your Spirits come in. You can have a party of three spirits, two of which fight alongside you at a time. As your Spirits level up, they will earn Link Points (LP), which you can in turn use to unlock new moves and passive abilities. Each Spirit has their own grid full of specific tricks to learn, the more powerful ones of course needing more LP to unlock. 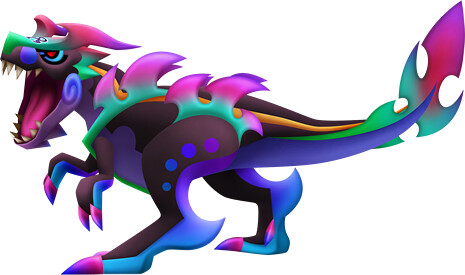 Say you’ve got an Iceguin Ace (a penguin-type) in your party. He can learn ice-based moves and build your blizzard resistance quickly. While the moves like Blizzara are permanently unlocked for use anytime, the resistances, stat boosts and life-saving abilities are strictly connected to the specific Spirit who learnt them. If you remove Iceguin Ace from your party, you lose that wonderful 40% ice resistance. Thus it takes a bit of strategy and fiddling with your allies in order to find an effective team for the enemies you face. You can also play with your Spirits by giving them stat-enhancing treats, petting or poking them, and taking photos of them romping around in your living room. All to be quite fun and charming in a Pokémon sort of way, or if you really miss your Tamagotchi.

Now I know it seems like I’ve done nothing but complain about this title, but the truth is that I really like this game. The story is pretty crazy and hard to keep up with, but one place where the game shines is its progression along the main storyline. As per Kingdom Hearts tradition, you always get one question answered only to have two more arise, but a LOT of stuff happens throughout. Without giving anything away, if you’ve been following the series up to this point and haven’t given up on it, this is not a title to be missed.

Bright moments comes in the form of music. Worlds like the Symphony of Sorcery (based off of Fantasia) and Traverse Town (with awesomely remixed The World Ends With You tracks) really knocked it out of the park with melodies that just fit with what you were doing. The sounds become eerie when there’s a hooded figure (and when AREN’T there at least seventy-eight of them in a Kingdom Hearts game?), and triumphant when you successfully drop into a new world. It’s all very smooth and fitting, with the standard instrumental version of “Simple and Clean” for the intro being just as fantastic now as it was ten years ago. It’s tough to make a song in a video game not tired and worn out, but “Simple and Clean” has held up amazingly well. Thanks for that, Ms. Utada Hikaru.

Kingdom Hearts: Dream Drop Distance may have a few flaws here and there, likely some that will see a lot of complaints, but they are easily overshadowed by its positive points and overall enjoyability. The vibrant new worlds, the stellar soundtrack, and the palpable plot progression make this one of the top games in the franchise to date, properly paving the way for Kingdom Hearts 3, which will hopefully the next new title we see.

Kingdom Hearts 3D: Dream Drop Distance is currently available on the Nintendo 3DS for $39.99.
A copy of this game was independently purchased by the reviewer.