When I learned that Rayman would be making its 2D mobile debut on iOS and Android, a sense of elation washed over me.  I literally couldn’t wait to see how the limbless wonder would look and play on our smartphones and tablets of choice given his recent stellar outing with Rayman: Origins.

Then just as surely, optimistic and perhaps naive expectation was taken around behind the shed and given a good beating by fear and trepidation as baleful news arrived to my earholes that Rayman’s mobile debut would be an endless runner platformer, where you simply press one button to control all of your actions.

It seemed almost sacrilegious at the time that they would even consider ‘dumbing down’ the experience in this way, not only in light of Origins superlative effort, but due to the likelihood of a mediocre effort causing the game to be lost in the burgeoning throng of endless runners on the market already.  A potentially terrible fate for a reinvigorated franchise looking to make its bones on the thriving iOS and Android platforms.

Thankfully, I was proven wrong.  Dead wrong.  Rayman Jungle Run is not only at the very zenith of this sub-genre of platform games, but it also stands ably on its own two feet; able to be whispered in the same reverent breath as its home console older brothers, both in terms of visuals and gameplay. 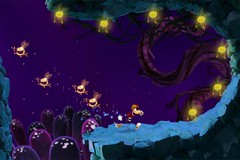 Rayman Jungle Run is quite simply the consummate auto-running platform adventure.  Everything is controlled by the touch of a single button and if that causes a swell of fear and uncertainty in you, than allow me to allay your fears; Rayman Jungle Run is supremely responsive and playable with each of its gorgeous forty odd stages providing the optimum canvas with which to test yourself in this regard.

The task, as it almost always is with Rayman, is to collect the golden ‘lums’ which hover around and populate each stage with the end goal of getting a perfect run by hoovering up each of the flying curiosities before you hit the end.

The manner in which each of the stages are constructed is to promote pin-point, pixel-perfect timing of your jumps and its here that Jungle Run really opens your eyes to the fact that this just isn’t any old endless running platformer.  Just because you’re running in a single direction, it doesn’t mean that you’ll always be jumping and manoeuvring in that same direction.  Frequently, you’ll find that you’ll have to jump up and off the side of walls, using jetpacks and Rayman’s hallmark ‘head-glide’ among other things to facilitate your journey through the game’s lushly detailed stages.

Your everyday endless runner this game is not. 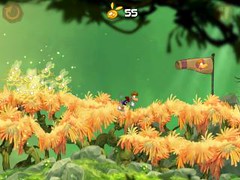 Perfecting a stage meanwhile is a worthwhile and ostensibly challenging affair, especially in later stages when the difficultly curve becomes skewed skyward.  The reward however, for collecting all of the lums in a stage (along with each of the three golden coins), is the unlocking of a tooth and when you have unlocked a mouthful of them for a certain character, unlocks a massively challenging special stage appears for you to pit your skills against.  It represents a nice little longevity extending bonus which provides you with additional incentive, alongside personal pride, to complete a level flawlessly.

Make no mistake though, Jungle Run’s twee and whimsy appearance conceal a difficult and in the later stages, wholly unforgiving monster that forces you to be ruthless with your timing and sharp with your memory.  While there is a certain amount of trial and error associated with the experience in the later stages of the game, it nevertheless remains a factor which is largely mitigated by your own reflexes and platforming skill.

And skill, is something that the game demands as despite its simplistic control scheme, in Rayman Jungle Run, you have no health; you’re either alive or you’ve just exploded like a balloon – there is no middle ground and because of that, the game can sometimes err on the side of frustration in the later stages; where a perfect run is spoiled by a single, mis-timed leap, causing you to re-live it from the very beginning.

Despite the frustrations and on occasion, the rage which accompanies yet another failed perfect run attempt, you nevertheless find yourself pushing forward to seek out that elusive sense of catharsis which only comes once you’ve finally conquered a level perfectly; as five-to-ten minute commute sessions turn into a frenzy of obsession as you pursue that perfect stage run.  Its a wondrous and gloriously satisfying feeling when you succeed though and one that makes all of the pixel-perfect jumping and vaguely anti-social OCD behaviour worth it in the end. 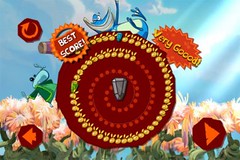 With your fingers adequately served by the tight platforming shenanigans on offer, the game also serves your eyes with equal flair as Rayman Jungle Run uses the staggeringly beautiful UbiArt engine that powers its older, home-console brethren and most recently,Rayman Legends on Wii U and it absolutely shows.  The game looks utterly staggering; packed with detailed, vibrant models that look like they’ve been torn wholesale from the 360 and PS3 titles and brightly coloured backgrounds all wrapped up in a buttery smooth framerate, Rayman Jungle Run is quite simply a luxurious treat for the eyes.

Rayman: Jungle Run is more than just a fine first outing on mobile platforms for the franchise since its new genesis with Rayman: Origins.  Some unreasonably brutal difficulty spikes aside, its hugely playable, terrifyingly addictive and one of the most beautiful portable titles available and most crucially, this is a game which isn’t just threateningly transcendent of the endless runner sub-genre, but one which is close to the apex of the platformer genre itself on mobile platforms.  At just £1.99/$2.99, there really is no way you can justify missing out on this.

Developed by Pastagames!/DotEmu and published by Ubisoft, Rayman Jungle Run is available now on iOS and Android formats.

An Android copy of this game was independently acquired by the reviewer from the Google Play Store.