Review: The Walking Dead Episode Four: Around Every Corner

Its difficult to review consecutive episodes in a gaming series like this where the hands of change never embrace anything else other than the progression of the narrative.

Indeed, as problematic as it might be that we’re effectively grading these episodes more as stories rather than games, it seems a tad churlish to be too distraught at that thought given that the emotional yarns crafted therein are done so with the sort of competence you would expect from such ably, practiced hands as those belonging to developer Telltale Games.

As much as a shift away from the vicinity of the motel that episode three represented, this penultimate episode seems set to house our gradually dwindling ragtag group in Savannah for this episode and likely, the final episode of this season. 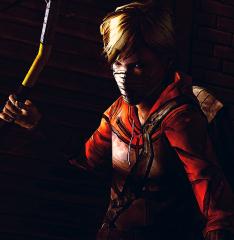 The new setting as you might reasonably expect, is awash with the sort of intense peril, drama and emotional situations that have made Telltale Games’ adaptation of The Walking Dead such a compelling proposition in the first place.
‘Around Every Corner’ is also notable for marking the debut of ‘Molly’; a violent woman with a dark past, she has the tools and skills to viscously and fearlessly engage the undead throng at almost every juncture; immediately juxtaposing her hunter-like nature to that of the vulnerable and victim-like survivors that the player has been made familiar with so far and making her character a breath of fresh air to the largely typified cast as a result.

Narratively speaking, this fourth episode also continues the oppressive bleakness that came across as such a stark characteristic of the writing in episode three.

In fact and this is as much a testament to the quality of writing as it is anything else, an emotional situation similar to one at the close of the previous episode, provides a real tear jerker moment here, despite the character in question only being known to the player through drawings and familial possessions dotted around the house where it takes place. It really underlines just how good Telltale Games have gotten at tugging at heartstrings and equally shows how far their storytelling skills have been refined.

Moving away from the story side of things for a bit; the puzzle element that the game possesses remains as ineffectual as a taxing gameplay device as it ever did; seemingly far more comfortable as a device to break up the conversations and cut-scenes, it boasts a terribly marginal challenge that shouldn’t trouble anybody who can articulate their digits on a joypad or keyboard.

Speaking of the gameplay, in previous episodes the number of times in which the player was engaged in first person shooting ‘action-scenes’ were few and far between and that was a blessing; the game never felt comfortable steeping outside of its linear puzzle solving and branching conversational skin with the experience coming across as clunky, rough and unconvincing.

As luck would have it, ‘Around Every Corner’ just so happens to boast a higher player afflicted zombie-bodycount than all the previous episodes combined and because of this, the twiddly shooting bits return and return frequently; their haphazard execution serving to irritate on a more frequent basis as a result. 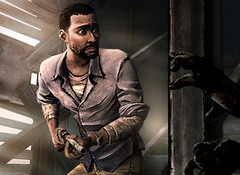 This penultimate episode of Telltale’s take on The Walking Dead fiction then, is definitely its most emotionally affecting, intense and action-packed episode yet. The thrill of having your decisions carry through from previous episodes remains as undiminished as ever, yet, the dependent gameplay systems attached to the game’s ever robust and relentlessly gripping narrative are arguably becoming stale and transparent in their vocation as second fiddle and thin pretext to it.

If you’ve come this far then you’re not going to get off the ride any time soon; your indulgence in what will surely be a spectacularly woven closure in the final episode all but assured by the captivating narrative and characters that Telltale Games have created thus far; especially with the relatively shocking cliffhanger that ‘Around Every Corner’ hits you with.

Short on technical thrills and gameplay satisfaction, but high in terms of how effortlessly it gets you to invest in its cast of survivors, hunters and scavengers in a world gone to hell, The Walking Dead remains as ever a compelling proposition that has yet to outstay its welcome.

Developed and published by Telltale Games, The Walking Dead Episode 4 is available to buy now on iOS, XBLA, PSN and PC.

An Xbox 360 copy of this game was independently acquired by the reviewer.